How to be a Cashflow Wizard

Home » How to be a Cashflow Wizard

How to be a Cashflow Wizard

One of the powerful lessons we can learn from Legendary Cashflow wizards is how they use “other people’s money” to painlessly finance the rapid growth of their businesses.  Amazon grew gangbusters for many years using its suppliers’ funds; and it did it without paying income tax.  It’s well worth seeing if we can use their approaches in our own businesses.  Yellow Belt

See how Amazon and Dell used cashflow much more creatively than conventional retailers Walmart and Costco.

We are using the term Cash Conversion Cycle (CCC) in this article (see the CCC article). If this is new to you, please read this specialist, article to learn about this valuable metric.

The quick take away is that it measures how quickly you get the cash from a sale. Fewer days is better than more days in the CCC.

When Michael Dell was growing his well-known computer company, Dell Computers, he started out with a Cash Conversion Cycle (CCC) that was 63 days.

This meant that a dollar spent at the front of his business, to buy raw materials or pay expenses, took 63 days to be returned to the Company Piggy Bank as cash.

Dell managers realised that this was an important issue governing how fast the Company could grow so they focused a lot of attention on reducing this figure.

By the time the then Chief Financial Officer left the business 10 years later, the CCC was negative 21 days.

This meant that they received their money 21 days before they had to spend it.

The principle reason for this amazing turn around was the fact that Dell, at the time, sold its computers before they were constructed and delivered to the owner.

They had the owner’s cash in hand before commencing to build the machine.

This was in stark contrast to their competing micro-computer companies who built their machines, dispatched them for display at IT shops and waited for a customer to purchase them.

It is quite possible, when working out your own Cash Accelerator program, that you can make substantial reductions in your present CCC period.

Amazon is a master of using Cashflow to funds its growth.

The graph below shows that it has been making hardly any Profit, comparatively, but its operating Cashflow has been growing hand over fist. 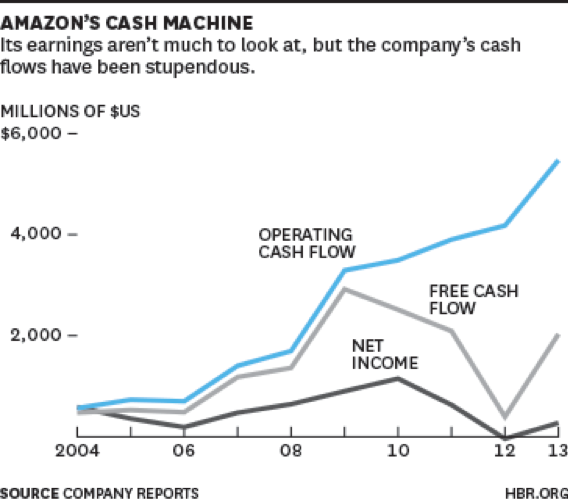 How does it do this?

Its Cash Conversion Cycle was negative 30.6 days at one point meaning it collected the cash from its customers a whopping 30.6 days before it had to pay its suppliers.

Amazon had the use of that money for 30.6 days – and it was really someone else’s money (their suppliers)!

We can compare Amazon CCC figures with those of other massive retailer businesses like Walmart and Costco. These are giant US shopping companies.
Even in this company, Amazon stands out; but maybe for a different reason. See the following graph. 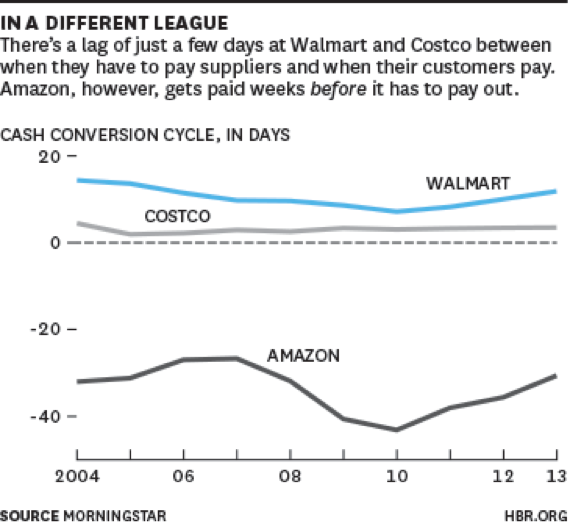 Walmart has an “inventory velocity” similar to Amazon’s while Costco, with its limited selection, turns its inventory substantially faster.

Walmart and Costco also both get paid by customers more quickly than Amazon does.

Where Amazon stands out is how excruciatingly long it takes to pay its suppliers — 95.8 days on average in 2013, according to Morningstar, compared with 30.1 for Costco and 38.5 for Walmart.

Clearly, a good CCC means others are financing your business for you.

The question to ask yourself is, can we do the same thing somehow?

Many Internet businesses can because customers pay before or at the time of delivery.

Refer to other articles on improving cashflow – Cashflow menu.

How to Use Gross Margin Analysis

Cashflow refers to the flow of money through your business. It usually goes out so you can buy stock and pay... read more

In this article, we discuss some of the common improvements that can be made to small business management accounting bookkeeping... read more

How to Boost Your Accounts Receivable

Accounts Receivable: "The process of collecting money your customers owe you."  Failure to have this process working well leads to insufficient cashflow... read more

Summary cashflow is the life blood of a business but it is a difficult thing to grasp as an abstract idea. ... read more

How to Measure Net Cashflow

Cashflow is the lifeblood of any business. If the speed you collect cash owing to you is slower than the rate... read more

The cost of labour is one of the largest overhead expenses in most businesses.  Any inefficiency here is an expense that must... read more

Overhead Margin relates to Overhead Costs, which are the costs in your business that do not change directly with a change... read more

How to Benefit from Cash Conversion Cycle (CCC)

How fast can you grow your business? This depends on how well you convert your sales into cash-in-hand. Is this conversion slow? You... read more