How to do Redundancy Planning

Home » How to do Redundancy Planning

How to do Redundancy Planning

Reducing the staff head count in a business is never a pleasant task – on either side of the desk.  However, it is often a fact of life in business.  This article distills out some of the business wisdom on Redundancy Planning.  Yellow Belt

The material we have collected is presented as a 12Faces Menu as there is no single solution for this issue.  You can pick and choose from the topics to assemble your own redundancy plan.

Keep in mind that down-sizing staff is a very emotionally charged activity and requires a good understanding of the relevant legislation so that you do not find yourself in hot water.

Some of the things that lead to redundancies include:

Cost reduction is a common reason for redundancy.

Staff are typically 50% – 70% of a businesses’ overhead costs. Therefore a fast way to reduce costs is to reduce head count.

Keep the Right People on the Bus

Jim Collins, in his well-known “Good to Great” books, uses this term to refer to having appropriate people ready to work on your business.  He argues that it is more important to have the right people, before you start on a business or project overhaul, than it is to try and get them as you are part way through the overhaul.

There should be no doubt in your mind that you are embarking on quite a difficult task.

Managers are often the sort of people that can put up with more uncertainty than more junior staff.  This means that you might be comfortable with the amount of change that you are about to introduce to your organisation, many of your staff may not.

They will quickly divide into 3 groups:

Early on, you should take something of a mental stock-take on the personnel that you have available to you and roughly categorise them into these three groups. If you have very few that are likely to support your efforts, you might want to consider whether this is something that you are ready to embark on or whether you should take time to change your staff until you get those who might support you.

Further reading on this topic at the article: How to Do Change Management for Profit

If you have specialist administrative positions, for example, legal, human resources, accounting, IT, finance, in a small organisation, they could be made redundant and replaced with outsourcing services.

These jobs might be thought of as “unproductive” in that adding more or removing these staff does not have a direct impact on production which is the determinant of profit.

Each of these persons on your full-time payroll will try to demonstrate that their skill is necessary and thereby contribute to the additional workload for other areas.

Who Goes, Who Stays in a Redundancy Plan

As part of your re-sizing process you will have decided that you need a certain number of, for example, sales people.  To choose which sales people to keep, we want to perform an 80/20 analysis on them.

The first step is to determine some method of scoring an individual’s contribution.  This might be on several different criteria such as wage, skills, flexibility, attitude and location.  With several people, this can become very complex very quickly.

A comparatively straight forward approach is to put people in a cell on a 4 cell matrix.

On the left-hand side is Attitude – first row is positive; second row is negative. In the columns is Skill – first column is high; second column is low.  You can quickly place people into one of these cells.

Clearly the people in Cell 1 (positive Attitude, high Skill) are keepers and you should hang onto them for dear life.  Some people in Cell 2 may be able to be improved with additional training or counselling.  They have the right Attitude but their Skill is low.  However, if they do not seem to have the ability to improve their Skill, then they might be one to go.

The person in Cell 3 (high Skill but negative Attitude) is someone to be wary of.  These are probably bright people but their poor attitude is likely to channel some of that talent to try to bring you and the project down.  If you cannot move their Attitude, it might be a good idea to let them go.

People in Cell 4 (negative Attitude and low Skill) are not as dangerous as those in Cell 3 because they are not necessarily competent enough to fight back as comprehensively as the people in Cell 3 can.  Nevertheless, they are not attractive people to continue in the employment of the business and are also candidates to be made redundant.

A successful manager would aim to have all staff that they retain in Cell 1 insofar as possible and Cell 2 if necessary.

Weights and Score Analysis of Staff

For a more “scientific” approach, we suggest that you build a Weights and Scores Matrix.

Further reading on this topic at the article: Using Weights and Scores Prioritising Technique

Put the various selection criteria on the left-hand side along with an importance weight for that criteria.  Across the top of the matrix place each of the individuals and score them.  When you multiply the scores by weights for each person they will get a value at the bottom.  This will quickly allow you to see what to rank each person’s contribution to your business.  You would normally then begin by retaining the highest scoring individuals up to the point where you have the number of staff you believe you will need to staff, in this case, the sales function.

An exception to this might be if you start retaining people who score less than an acceptable score from the maximum possible score.  Typically, if they are dropping below 60% and certainly below 50% of the possible score you might find that these people need to go and be replaced by better sales people.

This is a laborious process but it will give a rigorous analysis identifying the ability of an individual to contribute to your profit turn around.

A study of a Management/Organisation chart of your existing organisation can be an enlightening way to see where managers can be removed. 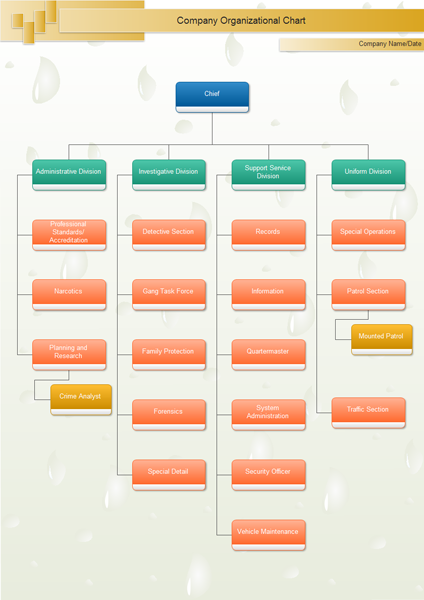 There is a management concept called the “Span of Control”.  This argues that people should typically have at least 8 direct reports and, in some organisations, many more.  At General Electrics, for example, it was reported that the number was an average of 15.  One can see a functioning example of this in the Armed Forces when you look at the ratio of Sergeants and Officers to Privates in the Army.

If your organisation chart shows many Managers with fewer than (say) 8 direct reports you could merge the several direct reports for each manager under one manager and the other would then be redundant.  An exception might be if the Manager is a technician actually being ‘productive’ in their job. If they are solely supervisory, Parkinson’s Law says they will be micro-managing their direct reports to prove their worth.

Further reading on this topic at the article: What Parkinson’s Law Tells Us About Wasted Work

Also, you can eliminate some positions by combining their roles.  In a small organisation with a small span of control, you could have the Sales Manager both managing the rest of the sales staff but also being an active Sales Agent.  This doubling up of roles might be particularly useful within geographic locations where an existing functional Manager (say Sales) can also be the Location Manager.

How Deep do we Cut in a Redundancy Plan

Parkinson’s Law tells us that “work will expand to fill the time available”.  This effectively means that there is work being done by staff that doesn’t add a great deal of value to the business.  Reducing the number of staff effectively takes out some of this hidden surplus capacity and the remaining staff do not necessarily need to work harder; just smarter by selecting what work really does need to be done.
Go to the article: What Parkinson’s Law Tells Us About Wasted Work

People experienced in rationalising staff numbers say that in most white-collar organisations up to 1 person in 4 can be made redundant without any reduction in worthwhile output. Sometimes this can be as high as 1 in 3 or 1 in 2.

The reason for this is:

By pruning these people early, their salaries are saved.  These are typically 60% of a services businesses costs.

In a larger organisation, there will likely be an HR Department to advise and assist with the process.

In a smaller organisation, and if there are several people to be made redundant, you might want to consider hiring specialist talent to do this.  They are likely to be:

How to do Change Management for Profit

Most people don't like change!  As a business owner/manager, you probably have a much higher tolerance for the uncertainty of change... read more

How to Do Staff Bonus Plans

Paying staff a bonus or other incentive is a well tested method of improving their commitment to the business's management goals. ... read more

What Parkinson’s Law Tells Us about Wasted Work

Northcote Parkinson, writing in 1955, semi humorously proposed his ‘law’ that “Work expands to fill the time available for its... read more

In an organisation of any size that has been around for a while, your management organisation chart will most likely... read more

Reducing the staff head count in a business is never a pleasant task - on either side of the desk. However,... read more

Secrets to Staffing Your Business Menu

People are probably the most important contributor to your business, getting the right ones on board will be a critical... read more

This article discusses hiring your business's first managers and supervisors.This typically starts to happen in what we have called the... read more

Home Speeding Up Success Business success is about innovating and reducing problems as quickly as possible.   Traditionally, this has just been a... read more

Human Resources is one of the essentials that make your business work.  Without people, it is most unlikely that your business... read more